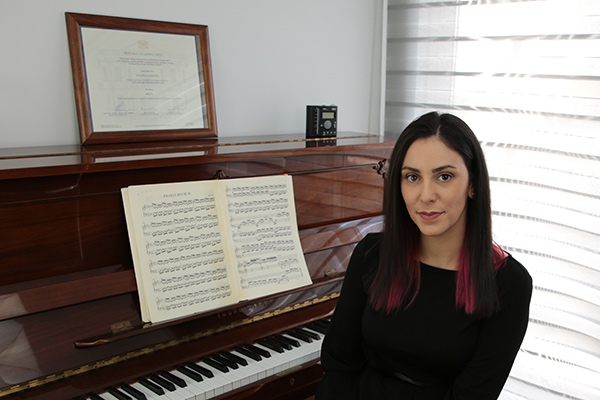 Beginning her musical education from an early age, she started taking lessons in Piano, music theory, singing and composition. Even from such an early age, her talent started showing, by earning distinctions and winning the 1st price in school and local music competitions in composition.

She was also very actively involved and was part of numerous bands, choirs and performed in many concerts. Realising her passion and potential in music, Stavry decided to study music and later on, to pursue music as a career.

She has a Bachelors in Music from ARTE Music Academy, with majors in Composition and Piano and she also recently completed successfully the Music Technology Course at Private Institute Cyprus School of Sound.
She has also studied, orchestral and choir conducting, violin, drums, accordion and singing.

Stavry works as a Piano and Music Theory teacher, she teaches music preschool classes, she is a choir director and also accompanies choirs on the Piano.
She also continues to work as a freelance Piano player, where she plays live for various bands and as a session player for studio recordings. She has taken part in many concerts in Cyprus and Greece and she is also a musician volunteer for Systema Cyprus.

Having the thirst for knowledge and need for constant development, she worked as a music stage manager assistant for various operatic plays such as “ Paphos Aphrodite Festival”, she conducted various musical ensembles and took an active role in the music production of Aeschylus’ ancient Greek tragedy “Prometheus Bound”. She also frequently attends music seminars to expand her musical knowledge.